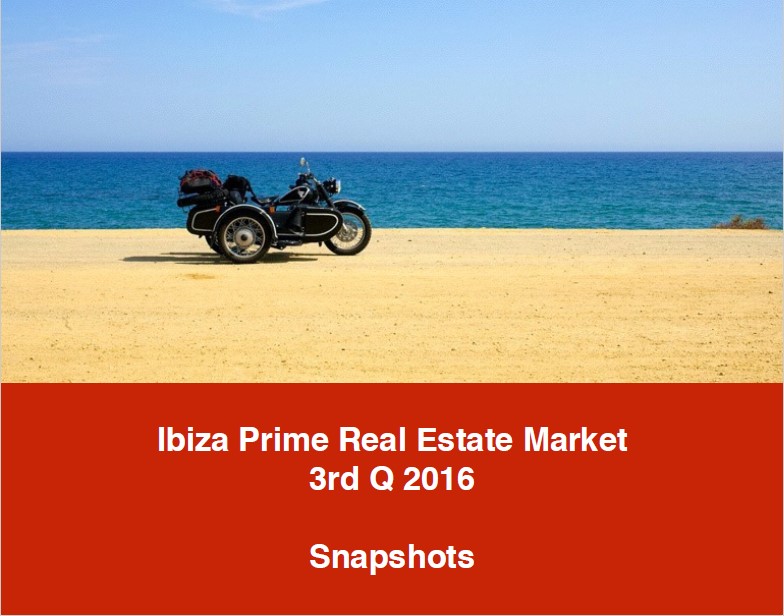 Ibiza property market statistics is of great interest and importance to Houses in Ibiza. With the season now pretty much over and with fresh data available, we can safely conclude that again 2016 has been a very good year for the island and real estate in general.

We try and look at all factors that can affect prices and so, aside from the islands own internal dynamics and extraneous factors, we feel that tourism has a direct impact on prices and for that reason we do study trends on who visits when, on how much they spend and how long they stay and the hotels & lodgings sector in general.

The figures we use can vary and sometimes are revised, and sometimes are guesstimates but the trends are there. Our sources are IBESTAT, Ministerio de Fomento, INE, Federacion Hostelera de Ibiza y Formentera, Exceltur and Idealista.

For the market on the whole, I would highlight the following;

Ibiza as a tourist destination is probably peaking in high season. We are close to full capacity in July and August.

The mix of tourists now includes, a significant amount of families (former island partiers now older and with children) and many of them, potential home buyers This also creates a good stock for future generation visitors.

Busy Months for Vacations and Holidays in Ibiza Increasing

The season is extending itself significantly. September and June are busy months and even May and October are seeing good growth. Our former 2 1/2 month season is becoming a 5 1/2 month season. This is very good news for rental yields and for the island as a whole.

Prices for prime real estate have increased by some 10-15 % in the last year.

Home sales are still growing, after a sharp 50 % increase in recent years, we expect 10% plus increase this year.

Building permits and refurbishing permissions are still being cut back, meaning the available legalised offer is, evermore scarce. Land to develop also continues to be very restrictive, and those with actual planning permission have increased considerably in value.

The vacation rental market again has been strong this year and is now consolidating attractive rental yields for buy to let investors with net yields of around the 4-5%.

The steady influx of foreigners that come to live full time on the Island is continuing.

Still, with all these good tailwinds, I believe prices in the prime real estate market are ready for a pause, and we should consolidate actual price levels for a period, before continuing its ascent. The sharp increase in prices in recent years need to be digested as stock gets rotated, and establishes a new price base. Demand still far exceeds supply, and probably will do so for a long while, but prices need to consolidate at these levels. 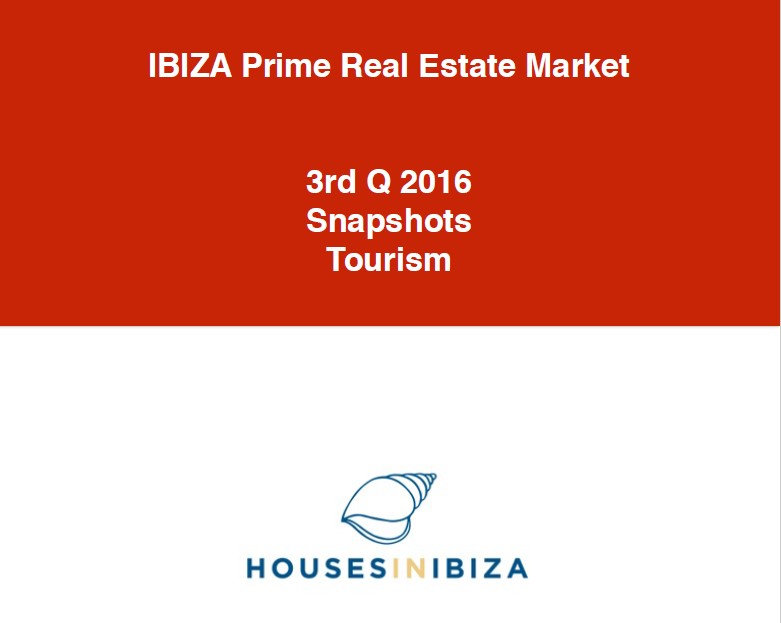 On course for another record year with +12% in passenger traffic.

Over 100 private jets land a day in season.

Passengers include both inbound and outbound Also included are resident passengers which are estimated to be less than an 10%. 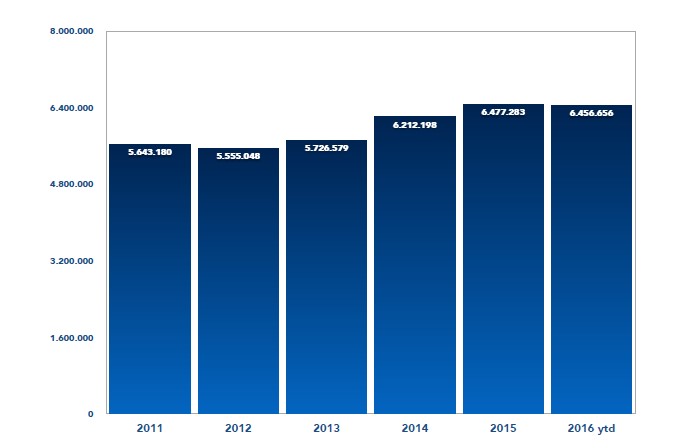 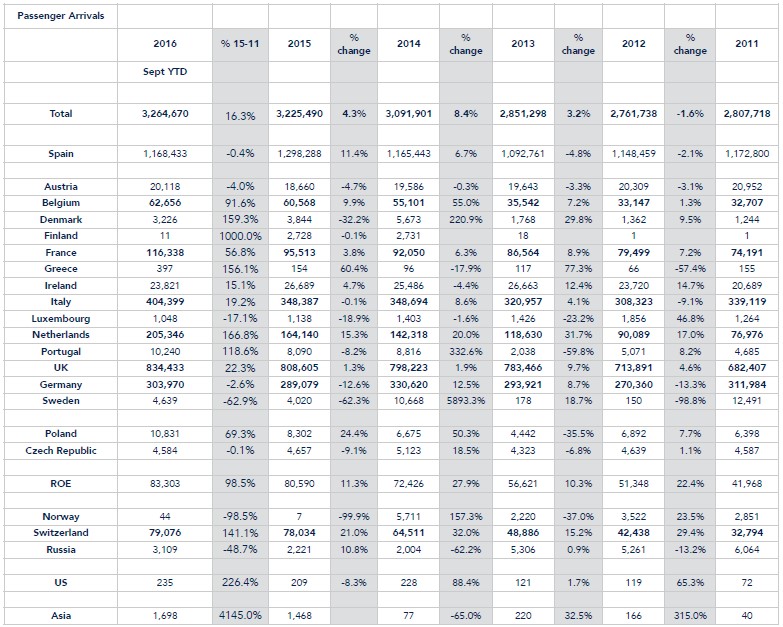 2016 Statistics Tourists in Ibiza by Nationality 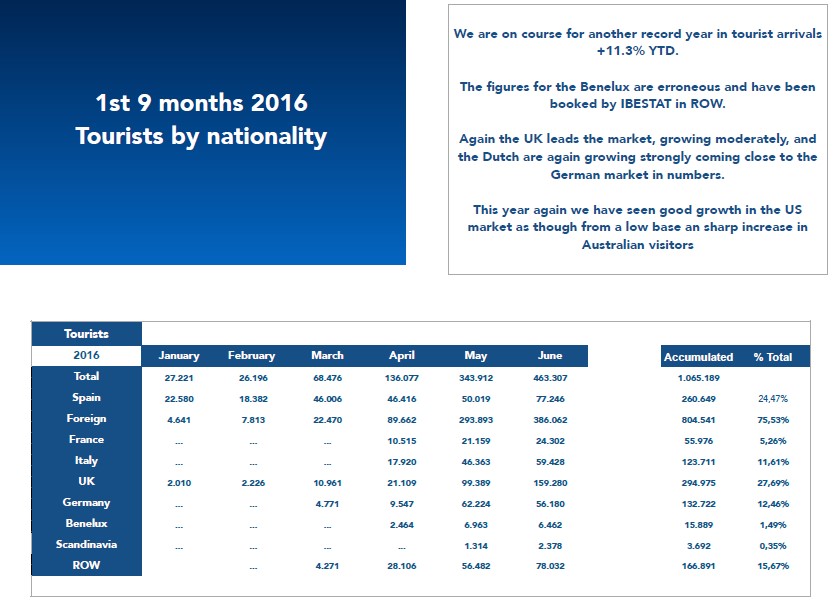 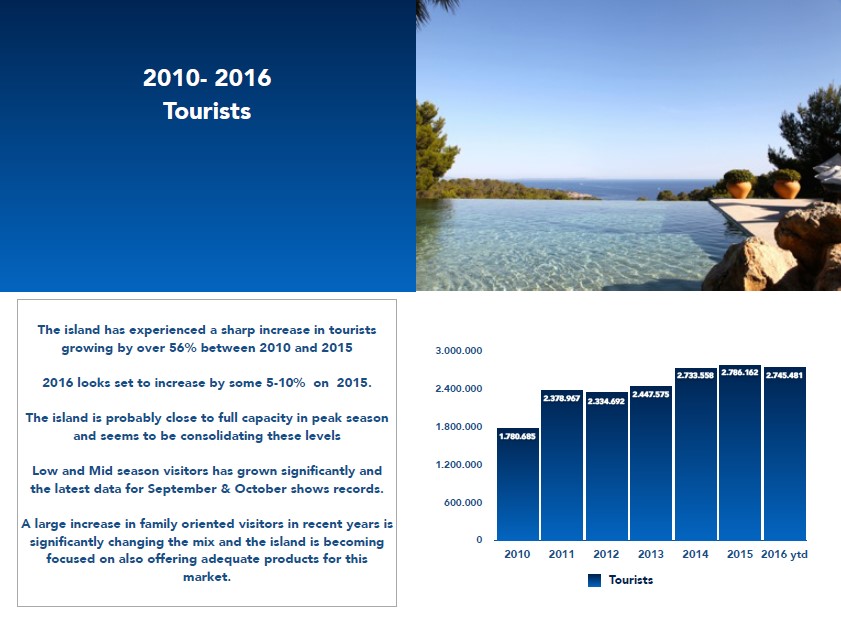 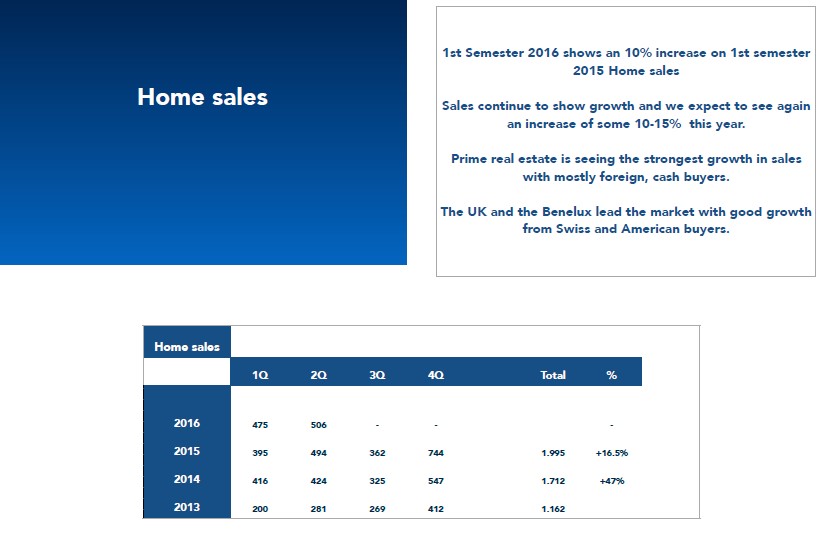 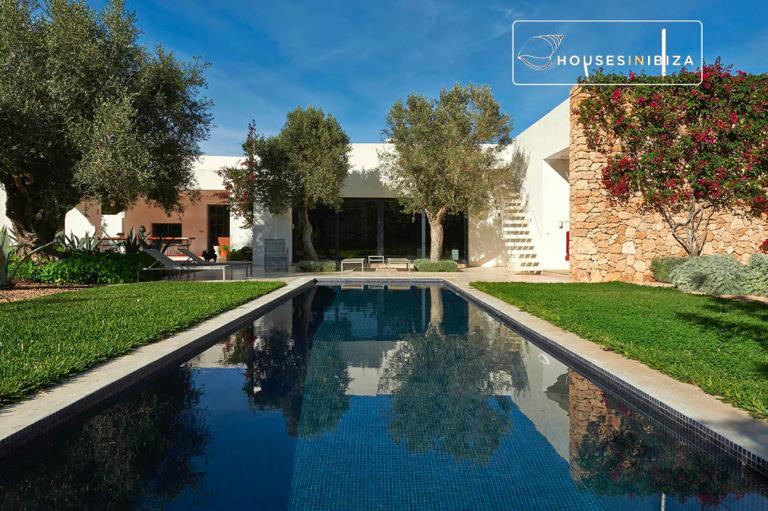 Housing Stock in Ibiza Statistics Available on the Internet 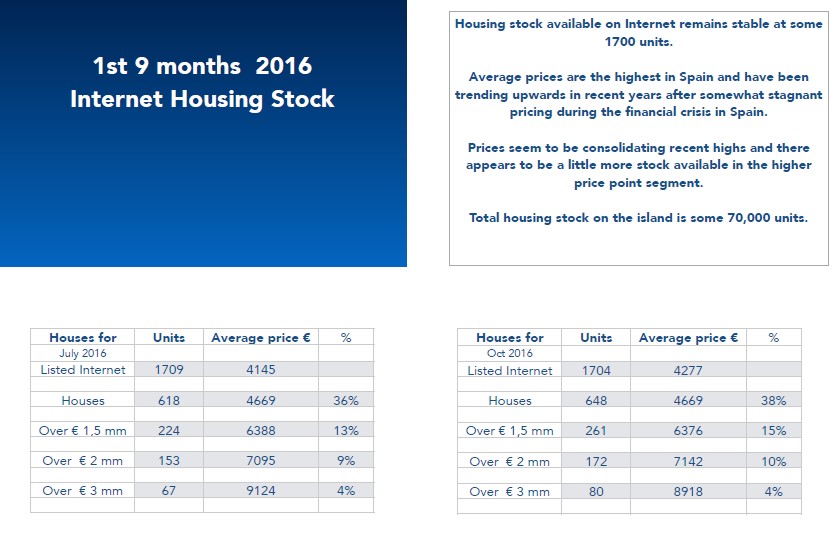 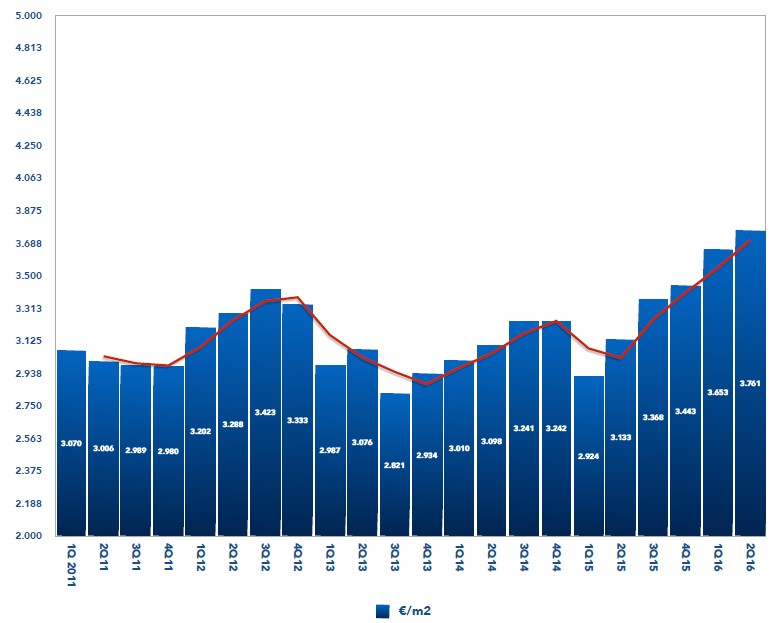 Value of Building Permits for Property in Ibiza rising 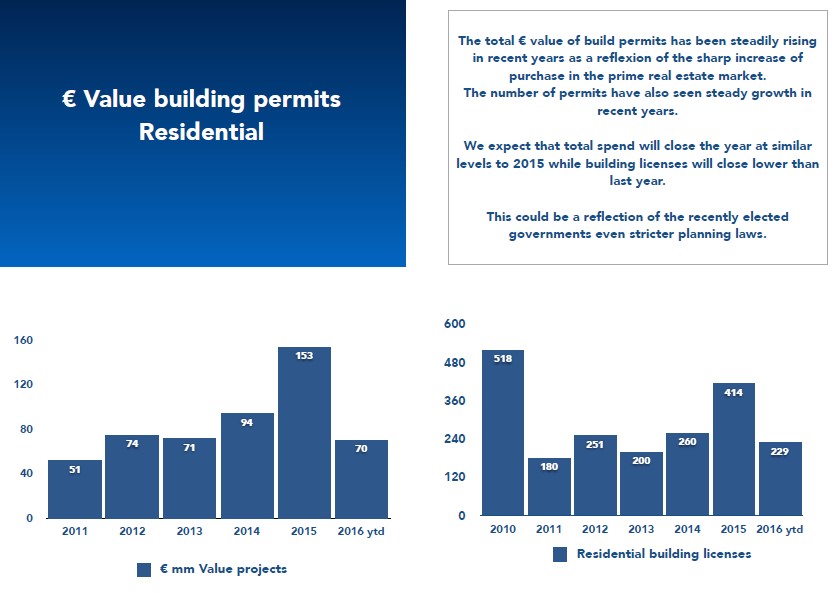 Some more important Ibiza property market statistics. We estimate that prices have risen some 10-15%% in the last 12 months and some 20-25% in the past three years for prime properties. 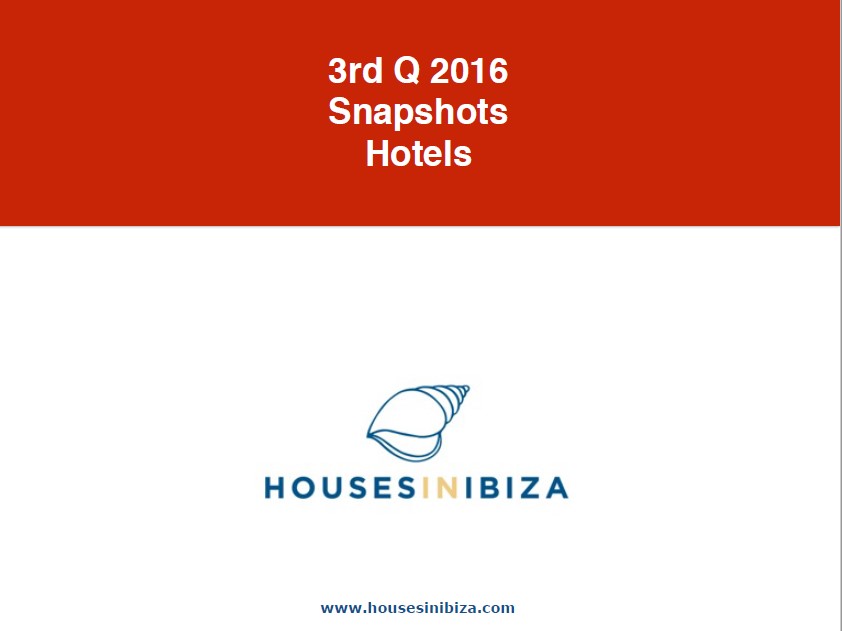 Hotels and Lodging in Ibiza Statistics 2016 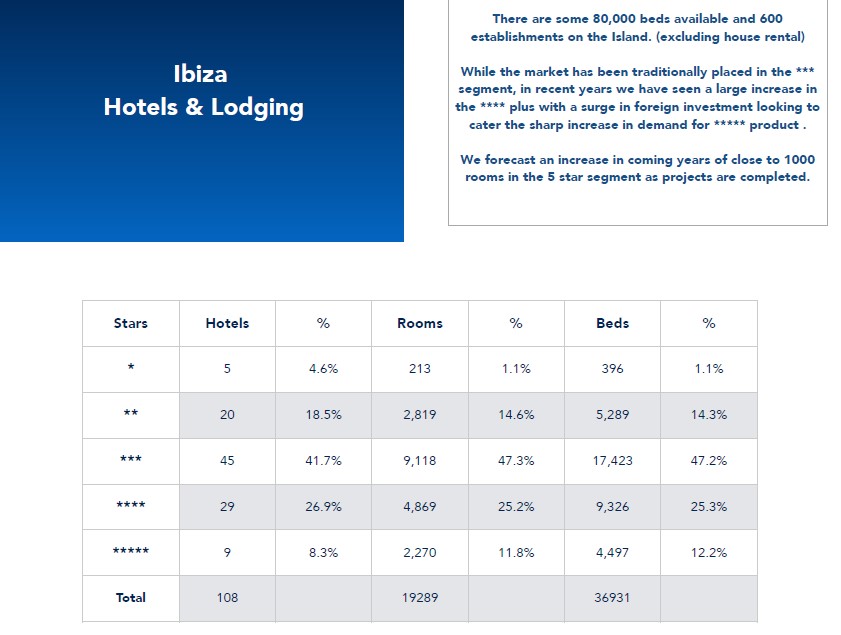 Total expenditure has increased sharply in recent years and now seems to be consolidating under the €2,500 bn mark.

House rentals which burst onto the scene on the back of internet seems to be consolidating current levels while the Hotels seem to have clawed back some market share.

Current legislation regarding house and apartment rentals is subject to much debate and we expect to see a fall in house rental income as apartments are not allowed to rent short term, though much may go unaccounted for . 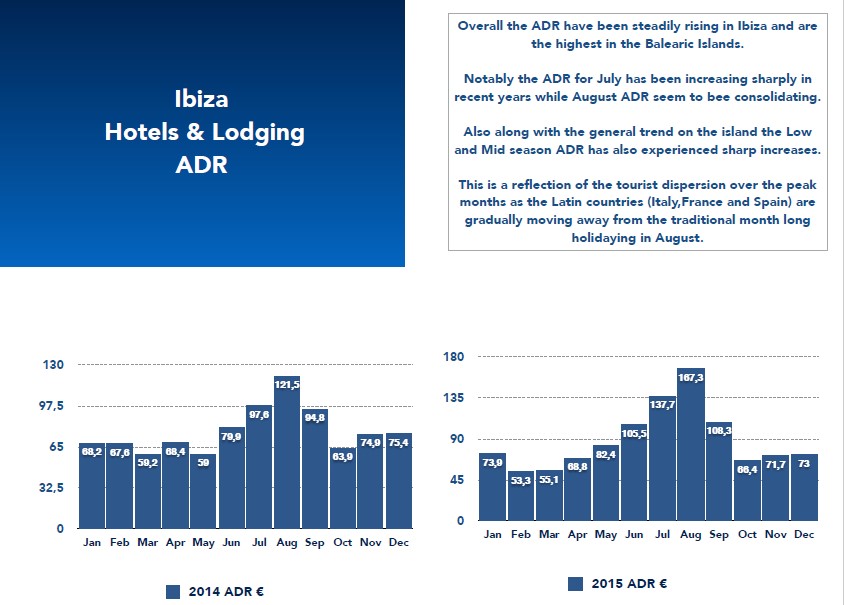 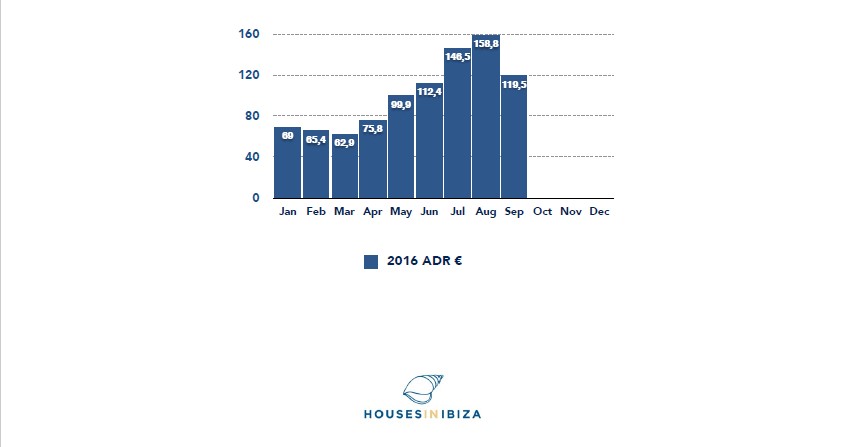 Overall the ADR have been steadily rising in Ibiza and are the highest in the Balearic Islands.

Notably the ADR for July has been increasing sharply in recent years while August ADR seem to bee consolidating.

Also along with the general trend on the island the Low and Mid season ADR has also experienced sharp increases.

This is a reflection of the tourist dispersion over the peak months as the Latin countries (Italy,France and Spain) are gradually moving away from the traditional month long holidaying in August.

Occupancy rates are consolidating the 95% levels in peak season and are growing sharply in the off season months of May and October and as such are extending to the season.

The mid season months of June and September are also growing albeit marginally but still are averaging 90%.

Although room availability off season reduces dramatically, we estimate by over 80%, open establishments are seeing good levels of occupancy on holidays and the Christmas period

Average stays have diminished somewhat in recent years and is currently just under 5,5 days. 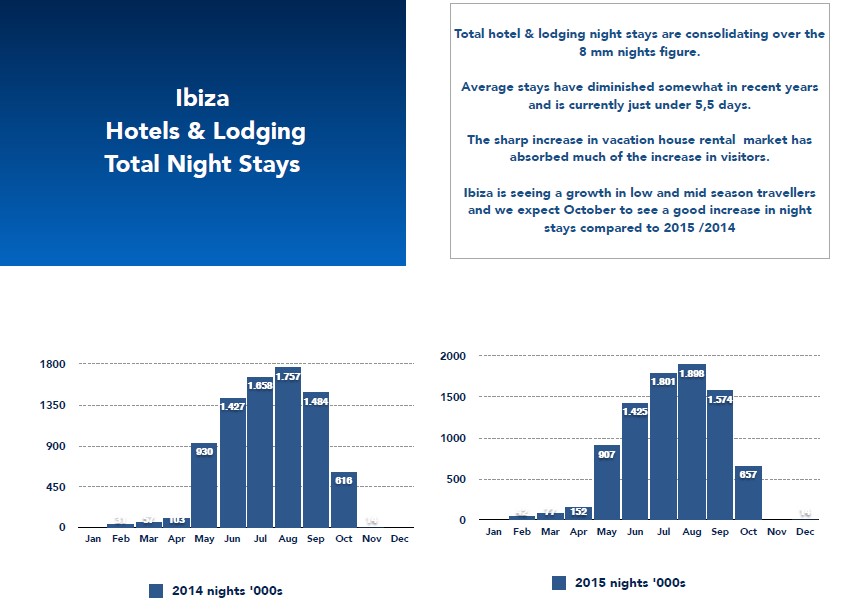 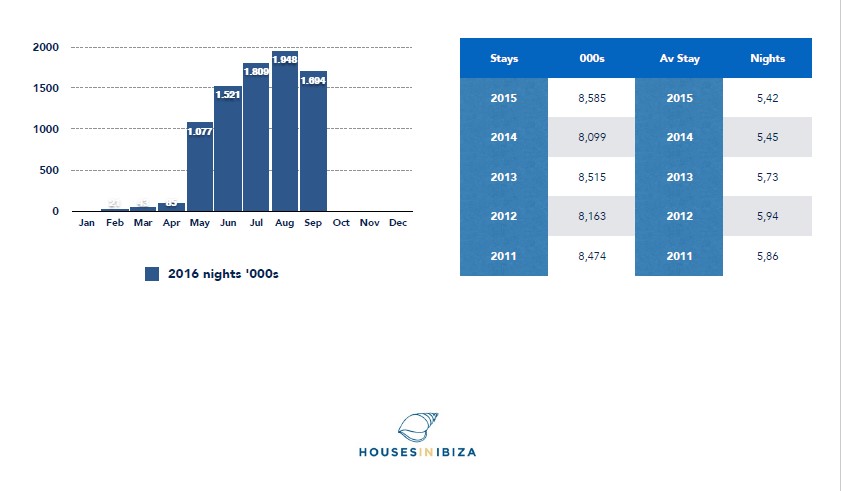 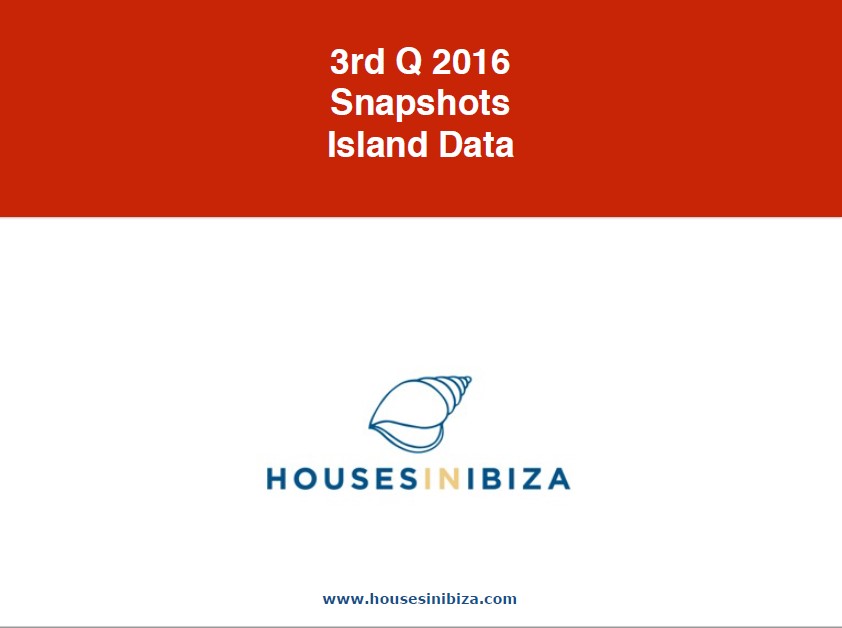 Data of the Island of Ibiza 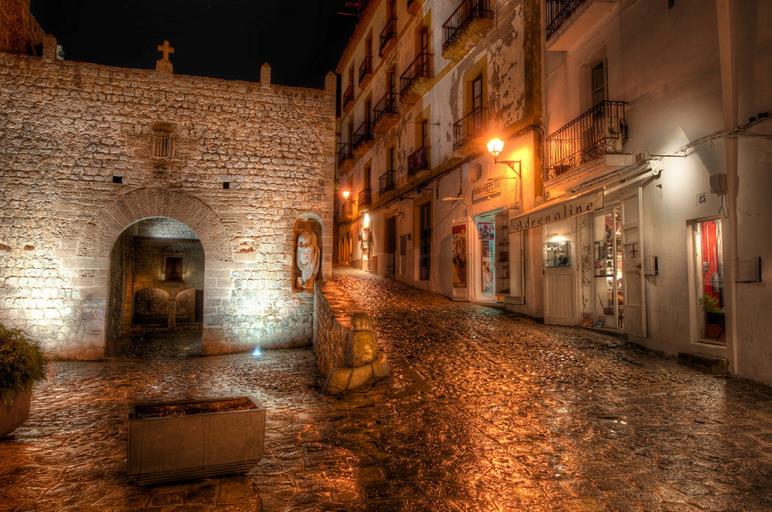