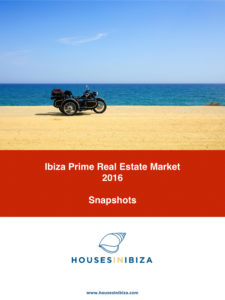 2016 has been a very good year for the island and real estate in general.

The figures we use can vary over time, as sources revise numbers, and sometimes are guesstimates, but the trends are there. Our sources are IBESTAT, Ministerio de Fomento, INE, Federacion Hostelera de Ibiza y Formentera, Exceltur and Idealista.

For the market on the whole, I would highlight the following;

Ibiza as a tourist destination is probably peaking in high season. We are close to full capacity in July and August.

The season is extending itself significantly. September and June are busy months and even May and October are seeing good growth. Our former 2 1/2 month season is becoming a 5 1/2 month season. This is very good news for rental yields and for the island as a whole!

The mix of tourists now includes, a significant amount of families (former island partiers now older and with children) and many of them, potential home buyers This also creates a good stock for future generation visitors, The Benelux and Swiss markets have grown sharply in recent years.

Prices for prime real estate have increased by some 10-15 % in the last year.

Home sales are still growing, after a sharp 50 % increase in recent years, we expect 10% plus increase this year.
Prices ,based on recent data, are increasing in the lower (<€1MM) and the mid segment of the market (<€3MM) while at the high end of the market (+3mm) prices are softening slightly.

Building permits and refurbishing permissions are still being cut back, meaning the available legalised offer is, evermore scarce. Land to develop also continues to be very restrictive, and those with actual planning permission have increased considerably in value.

The vacation rental market again has been strong this year and is now consolidating attractive rental yields for buy to let investors with net yields of around the 4-5%.

The steady influx of foreigners that come to live full time on the Island is continuing, and we have seen an increase of 2000 more residents registered in 2016.

Still, with all these good tailwinds, I still believe prices in the prime real estate market will continue to pause, and we should consolidate actual price levels for a period, before continuing its ascent. The sharp increase in prices in recent years need to be digested as stock gets rotated, and establishes a new price base. Demand still far exceeds supply, and probably will do so for a long while, but prices need to consolidate at these levels. 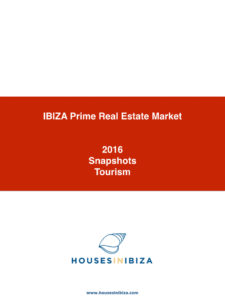 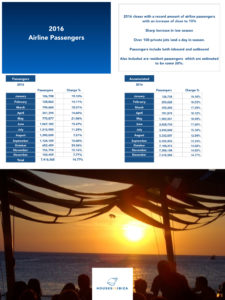 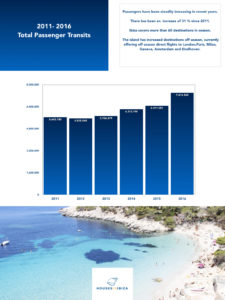 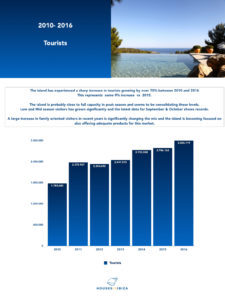 The island has experienced a sharp increase in tourists growing by over 70% between 2010 and 2016
This represents some 9% increase vs 2015.

The island is probably close to full capacity in peak season and seems to be consolidating these levels.
Low and Mid season visitors has grown significantly and the latest data for September & October shows records. 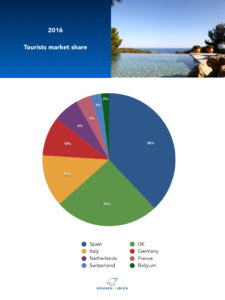 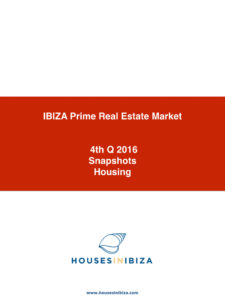 Sales continue to show growth and we expect to see again an increase of some 10-15% this year. 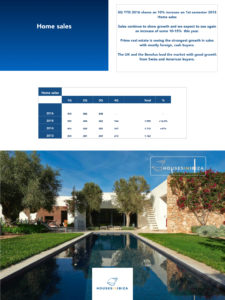 Housing stock available on Internet has fallen over 10% since October.

Most sales are taking place in the apartment segment.

Prices have increased again by some 5% overall

Total housing stock on the island is some 70,000 units. 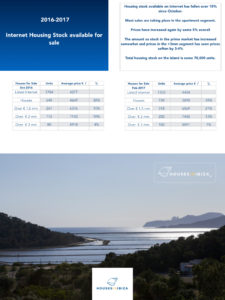 Average prices per square metre in Ibiza are the highest in Spain. (over twice the national average)

Prices after consolidating for a few years seem to be rising sharply since last year and now are some 20% higher than 2011. 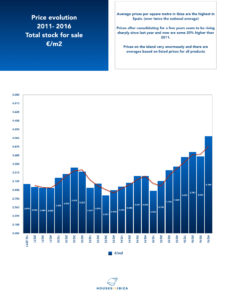 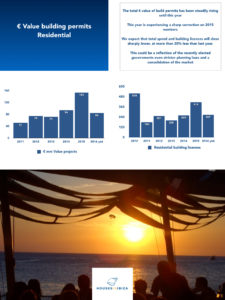 Prime country side farmhouse to reform/refurbish with plots of 25,000m2 plus with licenses- € 2,5 million plus 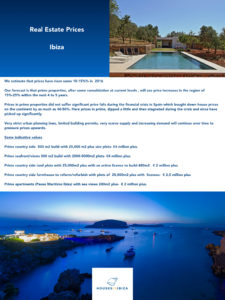 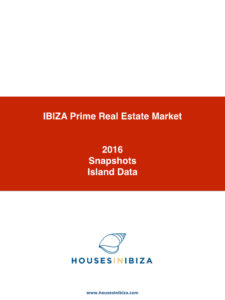 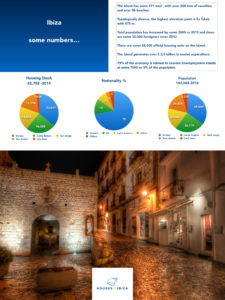